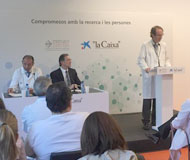 The Hospital de Sant Pau is one of the eight centres in Spain that the General Directorate of Basic Portfolio of Services of the National Health and Pharmacy System, dependent on the Ministry of Health, Consumption and Social Welfare, has authorised to use CAR -T medicines.

A pioneering trial in the State
The innovative test to be carried out is based on the selection of a type of T lymphocytes called memory T lymphocytes, which are small but extremely effective cells of the body. They are generated after a primary infection and are in charge of mediating the defence of the organism in successive infections of the same pathogen, as they are “remembered” from it. In addition, they have a powerful effect against tumour cells.

Non-Hodgkin’s lymphoma B is one of the most frequent blood cancers in the world. It is an oncological disease of the lymphatic system, which mainly contributes to forming and activating the body’s defences. In most patients, the disease is eliminated after intensive cycles of chemotherapy and often a bone marrow transplant. However, many patients relapse, and there are currently very few therapeutic options that can be offered to them.