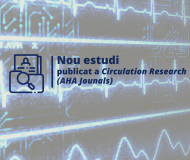 A multidisciplinary team of researchers from the University of Calgary, the Sant Pau Research Institute (IIB Sant Pau) and the Institute of Biomedical Research of Barcelona (IIBB-CSIC), and the Polytechnic University of Catalonia – BarcelonaTech (UPC) has identified one of the molecular mechanisms responsible for cardiac alternans, an alteration of the heart rhythm that facilitates the induction of ventricular fibrillation, a potentially lethal type of arrhythmia. This discovery, published today, February 19, in the journal Circulation Research (AHA Journals), opens the door to the development of new pharmacological treatments.

Cardiovascular diseases are one of the leading causes of mortality worldwide, being responsible for about 18 million deaths each year. In Spain, and Catalonia, they account for almost a third of deaths. These diseases also cause a significant decrease in quality of life. Now, an international team of researchers, led by Professor SR Wayne Chen of the University of Calgary (Canada), and formed by the heart rhythm and contraction group of the Institute of Biomedical Research of Barcelona (IIBB-CSIC) and the Sant Pau Research Institute (IIB Sant Pau), together with the Computational Biology and Complex Systems (BIOCOM-*SC) and Analysis and Control of Cardiac Rhythm (ANCORA) research groups of the UPC, have identified one of the molecular mechanisms responsible for cardiac alternans, an alteration of the heart rhythm that facilitates the induction of ventricular fibrillation, a potentially lethal arrhythmia.

Cardiac alternans have been known since the end of the 19th century, when an alteration in the pulse (hence the name pulsus alternan) that alternates a strong beat with a weak one was described. Almost a century later, this alteration was related to the propensity to suffer episodes of ventricular fibrillation, in which the heart cells suddenly stop beating in a synchronized manner, in many cases with fatal results within a few minutes. Since then, work has been done to understand the molecular mechanisms responsible for this arrhythmia, which would open doors to the development of possible pharmacological treatments.

The BIOCOM-*SC group at the UPC has been using computational models to study the origin of cardiac alternans for some time now. Thanks to different multidisciplinary collaborations, it has managed to develop computational techniques that allow the study of different physiological scenarios that explain their origin. As indicated by Blas Echebarría, principal investigator of the computational part of the study, “it is known that, in most cases, the alternans are due to irregularities in the regulation of dissolved calcium inside the cell. Mathematical models predicted that the alternans could appear due to alterations in the protein that regulates calcium release in the cell, the ryanodine receptor (RyR)“.

But the molecular mechanism responsible for this alteration has been the subject of debate during the last decade where different origins for the malfunction of the RyR have been proposed. As stated by researcher Leif Hove Madsen, researcher at the Sant Pau Research Institute (IIB Sant Pau) and IBB-CSIC, “the ryanodine receptor is a protein found in the inner membranes of the cell where large amounts of calcium are stored. The RyR behaves like a door that, when opened, releases the stored calcium, activating the contraction of the heart. However, if the calcium stores are overloaded, the opening of the gate goes out of control leading to irregularities in the calcium released and cardiac arrhythmias. This study has succeeded in identifying the key molecular mechanism in the regulation of the opening of this gate”.

Thus, Professor SR Wayne Chen of the University of Calgary, and one of the leading experts on the ryanodine receptor, proposed that this alteration in the function of the receptor could be due to its binding to another protein (calmodulin, or CaM), which regulates its function. To confirm this, Professor Chen designed an experiment, with the help of researcher Hove-Madsen: he changed the function of CaM by introducing into mice adenoviruses modified to produce either the protein in its normal state or mutations of the protein that increased or decreased its function, observing whether this decreased or increased the propensity to develop alternans.

However, experimentally it is not possible to observe what is happening with the RyR, so there is always the possibility that CaM is affecting another regulatory mechanism, and that there is an alternative explanation for this effect. To confirm whether it is the effect of CaM on the RyR that is responsible for this change, researchers from the BIOCOM-*SC group have used a computational model that describes in detail the interaction between CaM and the RyR and its effect on cardiac dynamics. The results of the mathematical model agree perfectly with that observed experimentally. As Blas Echebarría and Leif Hove-Madsen agree, “the agreement of the mathematical model with the experiments is so good that we can be quite sure that this is indeed the mechanism”.

Researchers do not rule out that there may be other factors affecting the occurrence of alternans. But the existence of a clear molecular mechanism that gives rise to the appearance of cardiac alternans may lead to the development of pharmacological treatments for this arrhythmia. In this sense, interdisciplinary work is very important, as is the ability to carry out basic research.

This discovery of ventricular dysfunction stems from research on atrial fibrillation and the development of models for the atrium, funded by the Ministry of Science and Innovation, the Generalitat de Catalunya and the Fundació Marató TV3.