Home | Actualitat | News | Researchers from Sant Pau and FIDMAG, attached to the CIBERSAM, carry out the first study in the world in which deep brain stimulation (DBS) is applied to patients with treatment resistant schizophrenia 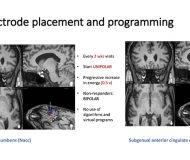 Researchers from Sant Pau and FIDMAG, attached to the CIBERSAM, carry out the first study in the world in which deep brain stimulation (DBS) is applied to patients with treatment resistant schizophrenia

The Unit of Resistant Schizophrenia of the Sant Pau Psychiatric Service, led by Dr. Iluminada Corripio, the Research Group in Clinical Psychiatry of the Sant Pau Research Institute – IIB Sant Pau, led by Dr. Maria J. Portella, and the Research Group on Severe Mental Disorders of FIDMAG Hermanas Hospitalarias, led by Dr. Edith Pomarol-Clotet, all attached to the Center for Biomedical Research Network in Mental Health (CIBERSAM), have published the first trial in the world on the application of the surgical technique of deep brain stimulation (DBS) in patients with treatment resistant schizophrenia, which suggests that this procedure may be beneficial in some patients who do not respond adequately to any other treatment.

The clinical trial entitled “Deep brain Stimulation in treatment resistant schizophrenia: A pilot randomized cross-over clinical trial”, published in eBioMedicine, one of the most prestigious generalist journals in the world, has been possible thanks to the implementation of two coordinated research projects funded by the Instituto de Salud Carlos III.

Schizophrenia is a fairly prevalent disease affecting about 1% of the world’s population (450,000 affected in the state), with up to 30% of patients not responding adequately to treatment with conventional antipsychotic drugs.

The most outstanding results of this pilot study are the clinical improvement in 4 of the 8 patients operated on, with a practically complete disappearance of the deliriums and hallucinations being observed in 2 of the patients in whom the electrode implants were placed in one of the two possible locations in this trial, specifically in the nucleus accumbens, which forms part of the so-called basal ganglia. This response rate of 50% is similar to that found in other studies of DBS in mental illnesses, such as depression or OCD.

Deep brain stimulation was initially used at Sant Pau to treat patients with neurological diseases such as Parkinson’s disease and in recent years this technique has also been successfully tested at the same Hospital in psychiatric disorders such as bipolar disorder and treatment-resistant major depression.

The patients of the clinical trial

Eight patients participated, four men and four women between the ages of 34 and 54. It was considered that 4 of the 6 patients who continued in the study responded to the treatment in a sustained manner and a practically complete disappearance of the delusions and hallucinations was observed in 2 patients. The symptoms that responded best to DBS were auditory hallucinations, and in the case of one patient who was admitted to a center, it allowed her to return to live with her family. Five of the patients presented a sufficient degree of clinical improvement to advance in their therapeutic process with linkage to personalized therapies or community resources (day centers and/or day hospitals), to which they did not have access previously due to the intensity of their symptoms.

An important lesson learned in this research project is the need to implement a personalized Recovery Program for each patient that uses psychotherapy tools to reintegrate them into their immediate environment, treat remaining symptoms and care for the caregivers.

Recently, the group of researchers of Sant Pau, with Dr. Iluminada Corripio as principal investigator, has obtained a second project financed by the Carlos III Health Institute (ISCIII), which will integrate this Psychological Program of Attention to Recovery and which will mean continuing to advance this pioneering initiative in the world.

The Clinical Psychiatry Research Group of the Research Institute of the Hospital de la Santa Creu i Sant Pau – IIB Sant Pau, led by Dr. Maria J. Portella, is part of the Consortium for Biomedical Research Network in Mental Health (CIBERSAM), and is recognized as a consolidated research group by the Generalitat de Catalunya (SGR). He was the pioneer in the use of DBS in major depression in Spain. With the experience gained from this research group, it has been possible to carry out this study, led by Dr. Iluminada Corripio.

The resistance to treatment of the main mental disorders is the focus of most of the studies carried out by the group, which has different competitive call aids to carry them out, mainly from the Generalitat de Catalunya, the ISCIII and Horizon2020. The three axes in which this functional Unit of Treatment Resistant Schizophrenia (TRS) is articulated are: 1) the program of integral clinical attention to TRS (thanks to the patronage of the Onda Corporation Grant), 2) projects in telepsychiatry in patients with clinical complexity and 3) neurostimulation. This unit is integrated by a psychiatrist (Dr. Alexandra Roldán) and three psychologists (Eva M. Grasa, Anna Alonso and Esther Pousa), with Dr. I. Corripio as coordinator.

FIDMAG Hermanas Hospitalarias Research Foundation has extensive experience in the field of psychosis, mainly in the area of neuroimaging. The research group is led by Dr. Edith Pomarol-Clotet, and is part of the Consortium for Networked Biomedical Research in Mental Health (CIBERSAM). They are also recognized as a consolidated research group (SGR) by the Generalitat de Catalunya. Its main interest is focused on knowing the underlying neuroanatomical alterations in the most severe mental disorders, such as schizophrenia or bipolar disorder, and on searching for the most effective treatments. For this purpose, they have been continuously obtaining aids in competitive calls to carry out research projects, mainly from the ISCIII and the Generalitat de Catalunya, as well as different international aids.

The Centro de Investigación Biomédica en Red (CIBER) is a consortium dependent on the Instituto de Salud Carlos III (Ministry of Science and Innovation) and co-financed with FEDER funds. The CIBER for Mental Health (CIBERSAM) is made up of 25 clinical, preclinical and translational research groups. It is mainly oriented to the study of mental disorders such as depression, schizophrenia, bipolar disorder, as well as anxiety disorders and mental disorders in children and adolescents or therapeutic innovation.