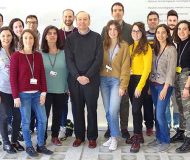 Researchers from the Research Institute of the Hospital de la Santa Creu i Sant Pau – IIB Sant Pau, the Autonomous University of Barcelona (UAB) and the Centre for Networked Biomedical Research (CIBER) have published an article in Advanced materials, one of the most prestigious international scientific journals in the field of nanomedicine and materials science. The work describes the generation by the researchers themselves, of a new pharmaceutical form of subcutaneous administration and sustained release of cytotoxic directed protein nanoparticles, which selectively eliminate metastatic stem cells, inducing a potent metastasis prevention effect in a colorectal cancer model with no detectable adverse or toxic effects.

The team of researchers, formed by Prof. Antonio Villaverde and Dr. Esther Vázquez, from the Institute of Biotechnology and Biomedicine of the UAB (IBB) and led by Dr. Ramon Mangues, from the Research Institute of the Hospital de la Santa Creu i Sant Pau – IIB Sant Pau (who have been collaborating closely for over a decade) have created inclusion bodies of amyloid and nanostructured fibres which, when administered subcutaneously in laboratory mice, are capable of releasing continuously soluble cytotoxic nanoparticles carrying the exotoxin of Pseudomonas aeruginosa, which manages to maintain a stable concentration of this nanomedicine in blood and tissue.

This new pharmaceutical form of subcutaneous administration for sustained release makes it possible to administer high doses of this nanofarm, at long intervals (weeks in mice and probably months in humans) without toxicity at the point of injection or in normal tissues, while generating a powerful antimetastatic effect. The development of the drug for human administration would reduce the need for frequent intravenous injection of current cytotoxic anti-tumour drugs, requiring hospitalization.

Apart from being controlled release systems, these inclusion bodies or nanoparticles incorporate a link that interacts with the receptor (CXCR4), present at high levels in the membrane of metastatic stem cells capable of generating metastasis (MSC CXCR4 +). Once this new pharmaceutical form is administered subcutaneously in mice with metastatic colorectal cancer, this bond directs each nanoparticle released by this amyloid structure (protein aggregates of fibrillar morphology) towards the tumor tissues, increasing their uptake very considerably, to internalize specifically in the CXCR4+ MSCs and induce their selective destruction.

This effect achieves a significant reduction in the size of the tumor in the colon while blocking the development of lymph node, lung, liver and peritoneal metastases, without appreciable uptake or toxicity in healthy (non-tumor) tissues. This therapy offers a response to the urgent medical need to inhibit the development of metastases, which represents the main cause of death in cancer patients. On the other hand, the selective destruction of tumour and metastatic cells increases the therapeutic index of this nanomedicine, obtaining a powerful antimetastatic effect without generating associated adverse effects, which differentiates it from most of the anti-tumour drugs currently used, which produce frequently severe adverse effects.

It is estimated that this new therapeutic strategy will have a high clinical impact by reducing the requirement for hospital administration, which most anti-tumour drugs have, and blocking the metastatic spread, responding to an unmet clinical need. On the other hand, it is important to note that this new pharmaceutical form, which combines sustained release with guidance by the CXCR4 receptor, could be used in the treatment of at least 23 types of cancer that also express high levels of this receptor in tumor cells.