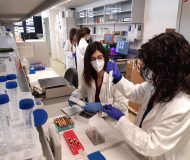 The first CAR-T immunotherapy drug produced entirely in Sant Pau and administered to the first patient, is part of a clinical trial of the centre itself, pioneer in Europe, of phase I CAR-T immunotherapy / II for the autologous treatment of relapsed / refractory CD30 + classic Hodgkin lymphoma and non-Hodgkin T lymphoma, funded by the Carlos III Health Institute and the Josep Carreras Leukaemia Foundation and the Josep Carreras Leukaemia Research Institute.

The research project is led by Dr. Javier Briones, head of the Cellular Immunotherapy and Gene Therapy Research Group of the Research Institute of the Hospital de la Santa Creu i Sant Pau – IIB-Sant Pau. Briones and his team have designed the CAR-T 30 and performed its pre-clinical development. They are also responsible for the production and quality control of the HSP-CAR-T 30 cells under GMP conditions to be infused into the pacients.

Sant Pau’s CAR-T cells are manufactured from the patient’s own T lymphocytes and by gene therapy they express a receptor to enhance the destruction of the tumour, the “chimeric antigen receptor” for which they are called CAR-T. The CAR-T of Sant Pau is enriched in a type of T lymphocytes called memory T; these cells in the human body are few in number, but extremely efficient and are generated after a primary infection. Memory T lymphocytes are the cells in charge of intervening in the body’s defence in successive infections with the same pathogen.

These cells have a powerful cytotoxic effect, quality of being toxic compared to others that are altered, and they live for many years in our body. “We will select these memory T lymphocytes from the patient himself and equip them with a “weapon” designed to eliminate CD30 antigens in their every detection, which are expressed by lymphoma tumour cells. Thus, in perpetuity, a «detector and eliminator» in the patient’s body would remain for any lymphoma cell that reappeared. Ultimately, it is the genetic modification of the patient’s own T lymphocytes so that they attack cancer cells “, explains Dr. Javier Briones, clinical responsible of the project.

The treatment has been carried out in the Haematology Service of the Hospital de la Santa Creu i Sant Pau, directed by Prof. Jordi Sierra and with the collaboration of the rest of the doctors, nurses, other staff and with the help of a multidisciplinary support team.

In the coming months a second academic CAR-T entirely produced in Sant Pau CD19 will be administered for patients with lymphomas and line B leukaemias, thanks to a 2 million euros grant by the “la Caixa” Foundation.

This scientific and clinical milestone has been possible thanks to the recent accreditation of the clean room to develop advanced therapies at IIB Sant Pau. The Research Institute of the Hospital de la Santa Creu i Sant Pau – IIB Sant Pau, in collaboration with the Banc de Sang i Teixitis de Catalunya, recently obtained the certificate of compliance with the Standards of Correct Manufacture of Advanced Therapy Medicines from the Spanish Agency of Medicines and Medical Devices (AEMPS) from the Ministry of Health, certificate that allows the production and quality control of cellular medicines type CAR-T. The accreditation and equipment at the new clean room will allow the IIB Sant Pau research groups to develop new therapies. In short, it will reinforce and boost translational research in Sant Pau this offering innovative treatments and advanced therapies to the patients.