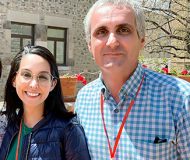 A study conducted by researchers from the CIBER of Diabetes and Associated Metabolic Diseases (CIBERDEM) at the Hospital de la Santa Creu i Sant Pau Research Institute has demonstrated the protective potential against atherosclerosis of one of the forms of vitamin B3, nicotinamide, in an animal model of massive atherosclerosis.

“The effect of nicotinamide was so powerful that it managed to reduce by almost half the atherosclerotic lesion in treated mice,” says Josep Julve, a researcher in the Cardiovascular Risk Metabolic Basis Group at the Sant Pau Research Institute and CIBERDEM and one of the coordinators of the work.
The results, which have been published in the antioxidant magazine Basel, are part of the doctoral thesis of Karen A. Méndez-Lara, first author of the publication, which explains how “the administration of nicotinamide induced an anti-inflammatory role in vivo, through the induction of IL-10, an anti-inflammatory cytokine, and the decrease of TNFa, pro-inflammatory, in aortas of treated mice”. “The anti-inflammatory action described by nicotinamide in mouse aortas could be extended to other tissues, such as adipose tissue, the inflammatory state is frequently found altered in conditions such as obesity or diabetes mellitus,” adds Dr. KA Méndez-Lara.

According to Dr. Francisco Blanco Vaca, director of the Biochemistry Service of the Hospital de la Santa Creu i Sant Pau, director of the Cardiovascular Risk Metabolic Basis Group of the Sant Pau Research Institute and coordinator of the study, “the findings are part of a line of research on the potential of nicotinamide in high-risk cardiovascular diseases such as obesity and diabetes mellitus.

Nicotinamide administration also protected against oxidation of non-HDL atherogenic lipoproteins, being this effect consistent with its role as a “scavenger” of reactive oxygen species in vitro.

A potential therapy for type 2 diabetes linked to obesity
Our body uses different forms of vitamin B3 for the synthesis of nicotinamide adenine dinucleotide, or NAD, a molecule found in all our cells and also plays a unique role in maintaining cellular physiology and resilience to metabolic stress conditions.
“NAD+ deficiency is strongly linked to different pathophysiological processes, including type 2 diabetes mellitus and obesity. Thus, it has been described that a progressive decrease in NAD + content in different tissues and organs in animal models of these diseases so that their supplementation through the administration of precursors, such as nicotinamide, could potentially be an effective therapy for them “suggests Dr. Josep Julve.
Other researchers from the Hospital de Sant Pau / IIB Sant Pau, the CIBERCV, the University of Barcelona and the Hospital Clínic de Barcelona also collaborated in the development of this study.