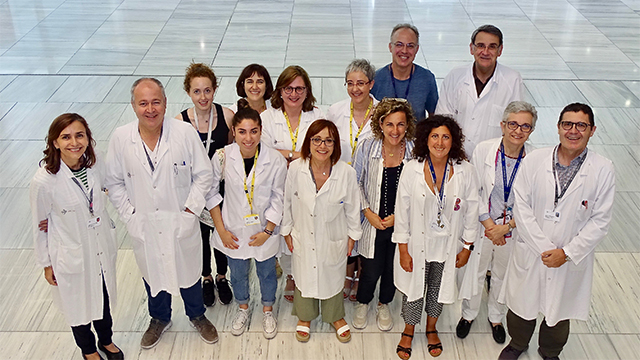 Researchers at the Research Institute of Sant Pau (IIB Sant Pau) and CIBER, led by Eugenia Mato of the Endocrinology, Diabetes and Nutrition Research Group and Joan Carles Escolà-Gil of the Risk Metabolic Basis Research Group Cardiovascular, have shown the role of cholesterol and one of its main metabolites, 27-hydroxycholesterol (27HC) in the growth of the thyroid tumor, as well as in its aggressiveness. The work has been published in Scientific Report.

Research shows that tumor human cells develop more rapidly in cholesterol-containing cultures than in their absence, due to their subsequent 27 HC transformation in the interior of the tumor cell. Studies were corroborated in human thyroid epithelial cancer tissues, where a direct association was found between the tumor aggressiveness and a reduction in the main enzyme that eliminated the 27HC molecule, the CYP7B1.

The work, published in Scientific Reports, shows that 27H promotes the growth and spread of the most common types of thyroid cancer. The authors, who belong to CIBER and the Research Institute of Sant Pau, claim that “Thyroid cancer tumors, because they present a reduction in the enzyme to eliminate 27HC, are generating a molecule that promotes the growth of the tumor “.

“Reducing cholesterol through changes in dietary or drug habits could reduce the risk of thyroid cancer,” says Giovanna Revilla, the first signatory of the work and researcher who conducts her doctoral thesis at the Research Institute of Sant Pau. In addition, “a drug that activates the CYP7B1 enzyme could help prevent or, at least, treat this disease,” he adds.

The researchers that led this study belong to the CIBER of Bioengineering, Biomaterials and Nanomedicine (CIBER-BBN) and the CIBER of Diabetes and Associated Metabolic Diseases (CIBERDEM). Researchers Rosa Corcoy, Cintia González and Alberto de Leiva from the Research Group of Endocrinology, Diabetes and Nutrition of the IIB Sant Pau and members of the Endocrinology Service of the Hospital de la Santa Creu i Sant Pao have also participated. Sant Pau and the CIBER-BBN; Enrique Lerma and Victoria Fuste of the Pathological Anatomy Service of the same Hospital; Antonio Moral and José Ignacio Pérez of the General and Digestive Surgery Service of Sant Pau; Mònica de Pablo Pons, Annabel García-León, David Santos, Gerard Sabé and RMª Blanco of the Research Institute of Sant Pau; Lucia Balla-Rueda and Ana Cenarro from CIBERCV and the Institute of Health Research Aragón; and Marcelo Magalhaes and Manuel dos Santos Faria from the Hospital of the Federal University of Maranhão in Brazil.