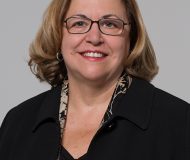 The Berlin State Senate, at the proposal of the Mayor of this city and the Senator for Science and Research, Michael Müller, recently appointed Lina Badimon, director of the “ICCC Cardiovascular Program” of the Sant Pau-IIB Sant Pau Research Institute and group leader of the CIBERCV, as a new Member of the Supervisory Board of the Berlin Health Institute (BIH Supervisory Board).

Dr. Badimon was recently elected chairperson of the BIH Scientific Advisory Board, thus taking a seat on the Supervisory Board. She succeeds Professor Dr. Stefanie Dimmeler from Goethe University in Frankfurt, who has chaired this advisory body since October 2017.

Badimon became a member of this Board in April 2019. His experience is particularly relevant to the new BIH area of vascular biomedicine, which aims to advance research into the malfunctioning of the vascular system.