In a discovery proteomic study we identified changes in ApoJ glycosylation profile as a biomarker of the early phase of ischemia. We have further characterized these specific glycosylated forms and we have developed a novel methodology for the specific detection of ApoJGlyc.

The usefulness of this first prototype has been successfully validated in a proof of concept study in patients with myocardial ischemia and healthy controls showing a high discriminating ability (97% sensitivity/71% specificity). Additionally, this prototype has shown an added prognostic value in the context of myocardial ischemia being able to identify patients at risk of suffering major adverse cardiac events or even dying during the 6 following months after the ischemic event. Furthermore, additional validation studies in a subgroup of patients with stable coronary artery disease have proven that ApoJ-Glyc measurement could also have a predictive value for the presentation of recurrent ischemic events (including both cardiac and cerebral events). In a second phase, we have also tested the potential diagnostic value of ApoJ-Glyc quantification in the context of cerebral ischemia. A pilot study has shown a significant decrease of ApoJ-Glyc in stroke patients.

Cardiovascular and cerebrovascular diseases are the main cause of mortality and morbidity in the world. Acute cardiac ischemic events are still one of the most common cardiac emergencies with substantial morbidity and mortality worldwide. Early detection of ischemia is essential to prevent irreversible myocardial damage and heart failure. In this context, we have already validated the usefulness of our technology for the early detection of myocardial ischemia in clinically relevant samples (TRL5). On the other hand, stroke is the first cause of death in many developed countries with an important prevalence in women. The correct and efficient implementation of current treatment options is highly dependent on the early diagnosis and the adequate categorization of the ischemic event. Indeed, there is an unmet clinical need to identify biomarkers able to discriminate between thrombotic and haemorrhagic stroke in the first hours after the onset of the event. We have already validated the ability of our technology to detect the presence of cerebral ischemia (TRL4). However, a key issue would be the demonstration of its usefulness for the early discrimination between ischemic and haemorrhagic stroke in clinically relevant samples. With all this in mind, in the present project we aim to validate the usefulness of ApoJ-Glyc quantification for the early discrimination between ischemic and haemorrhagic stroke. In addition, we aim to perform proof-of-concept studies to demonstrate the added value of ApoJ-Glyc as a protective molecule in the context of ischemic damage. These two points will turn out into an increase of the awareness and the potential target market of our novel biomarker, thus increasing the value of our product and bringing it closer to a market-ready stage.

The implementation of our novel biomarker in the clinical practice will enable the application of tailored treatment in the context of ischemic events, improving patients’ prognosis and reducing the social and economic impact of the disease. 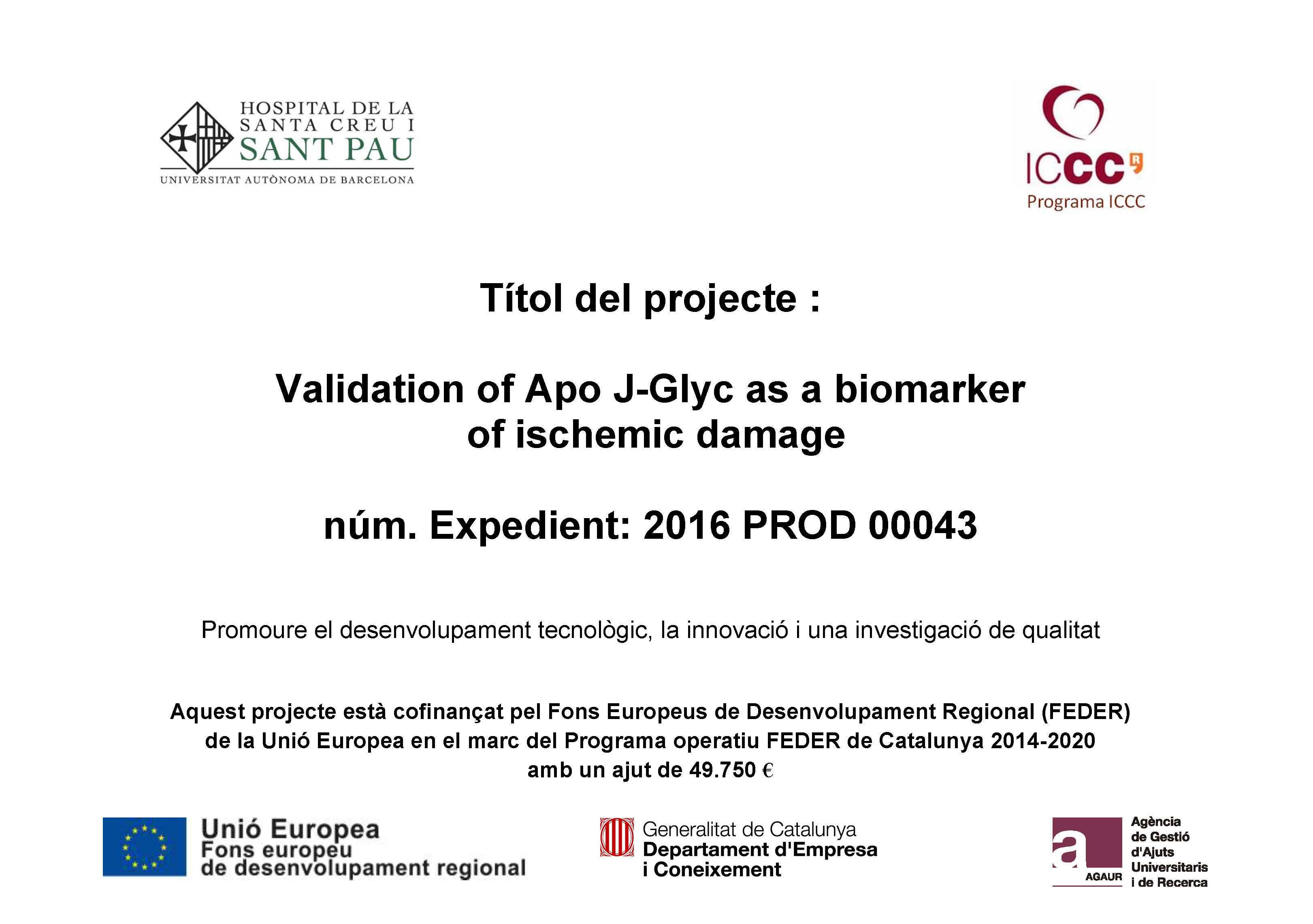